When Are Your Tires Worn Out?

Hey Reno area drivers, are your tires worn out? What is the standard for our Nevada streets? How can you tell on your vehicle?

While there may be legal requirements for the Reno area, there are safety concerns that go beyond meeting minimum replacement mandates.

Since August 1, 1968, United States law has required tread wear indicator bars be molded across all tires at a depth of two-thirty-seconds of an inch. When tires are worn so that this bar is visible, there’s just 2/32 of an inch – 1.6 millimeters – of tread left. It’s that level of wear that’s been called into question recently.

We’re referring to the tread depth on a tire, it can’t move surface water out of the way and you start to hydroplane.

In a safety study, a section of a test track was flooded with a thin layer of water. If you laid a dime on the track, the water would be deep enough to surround the coin, but not enough to cover it. 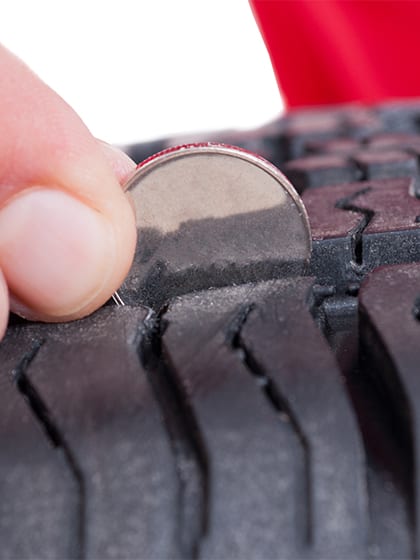 A car and a full-sized pick-up accelerated to 70 miles per hour, or 112 kilometers an hour, and then made a hard stop in the wet test area. Stopping distance and time were measured for three different tire depths:

So what happened with the 2/32 inch/1.6 mm tires on the car? Get this – the car was still going 55 mph/89 kph when it had traveled the distance required to stop with new tires. Stopping distance was nearly doubled to 379 feet/116 meters, and it took 5.9 seconds.

Wow! That means if you barely have room to stop with new tires, you would hit the car in front of you at 55 mph/89 kph with tires worn down to 2/32 of an inch.

Now, with the partially worn tires – at 4/32 of an inch, or 3.2 mm – the car was still going at 45 mph/72 kph at the point where new tires brought the car to a halt. It took nearly 100 feet, or about 30 meters, more room to stop and 1.2 seconds longer. That’s a big improvement. We can see why Consumer Reports and others are calling for a new standard.

Of course, stopping distances were greater for the heavier pick-up truck.

How do you know when your tires are at 4/32 inch or 3.2 mm? Simple; just insert an American quarter into the tread upside down. If the tread doesn’t cover George Washington’s hairline, it’s time to replace your tires. With a Canadian quarter, the tread should cover the numbers in the year stamp.

How do people feel about replacing their tires earlier? Well, they are a big ticket item and most people want to get the most wear out of them that they can. But are you willing to risk that much more just to run your tires until they are legally worn out?

For us, and we would guess for many, the answer is “no”.