In today’s Sparks Auto Care tip we want to discuss a system in our vehicles – the cooling system. It’s one of those things that Reno and Sparks vehicle owners don’t give much thought to until it breaks leaving them stranded by the side of a road in NV. Damage like this can also lead to costly auto repairs.

Cooling systems falter more often than any other mechanical system – generally because of neglect. Don’t you dislike it when something breaks, and you could have done something to prevent it?

The good news is that if Reno and Sparks drivers take care of their cooling systems, they should keep working for the life of their car. Old Cooling System By Ford

Here at Wayne’s Automotive Center in Reno and Sparks, we stress preventive maintenance services like renewing your coolant according to the auto manufacturer plan. But the various components that make up the cooling system need attention too. The significant parts of the cooling system are the water pump, freeze plugs, the thermostat, radiator, cooling fans, the heater core, the pressure cap, the overflow tank and the hoses.

It sounds complicated, but we Reno and Sparks residents don’t have to be specialists – we can leave that to our helpful and knowledgeable service advisor at Waynes Automotive Center. But, having an overview will help us remember how to take care of your car’s cooling system. 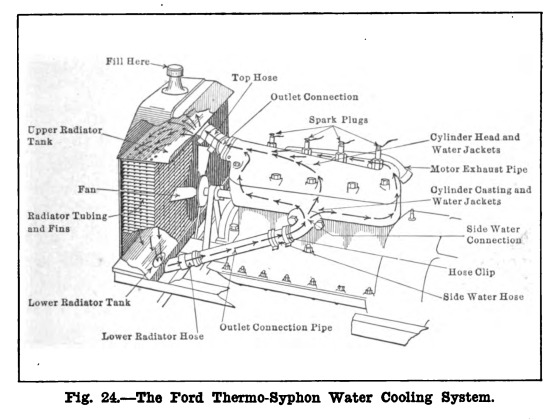 Most people would be shocked to understand that burning fuel in your engine produces up to 4,500 degrees F/2,500 degrees C of heat. And all that energy has to be drawn away. If the temperature rises too much, the pistons will weld themselves to the inside of the cylinders – then you have to replace the motor. That would cost thousands of bucks.

In some vehicles, the serpentine belt powers the fan. Still, on others, an electric motor runs the fan. Electric fans will regulate on and off as needed. Many drivers hear the fan kick off shortly after they turn their vehicle off. A running fan happens because the sensor has determined that the engine needs a little help cooling down to a safe temperature.

How It All Connects

A hose joins the water pump to the radiator. The water pump forces the water into the vehicle engine area. The engine block and cylinder heads have tunnels for the coolant to snake in and out all without contaminating the oil or seeping into the combustion chamber. In the automotive community, they refer to these passages as the “water jacket.”

As the coolant is working its way through the water jack passages, it is absorbing heat on its way back to the radiator. Working in harmony between the motor and the radiator is a component called a thermostat. The thermostat’s function is to monitor and keep the temperature of the engine in a comfortable zone, just like your home thermostat controls the temperature in your house. It gets your engine up to the correct operating temperature and then keeps it from overheating.

When you first start the engine, it’s cold and needs to heat up. So the flow of coolant has to be blocked to allow the engine to heat up, the thermostat is responsible for this. The thermostat begins to let coolant flow through the system as the engine heats up.

Caution: when you stop the vehicle the car is usually hot. You should never open the reservoir or the radiator cap until things cool down. The cooling system is pressurized, and loosening the caps while it’s hot can cause hot coolant and steam to escape resulting in severe injuries and burns.

Cooling system faults are one of the most common mechanical issues in cars and trucks in Northern Nevada. At Wayne’s Automotive Center, we can do a periodic inspection of the components for leaks, loose connections and weakening hoses.

Belts drive the pump, and these same belts need replacement occasionally. The water pump will ultimately wear out, requiring replacement. Spending some cash on replacing the drive belts and the water pump is a minimal cost.  Much less than the cost of repairing the extensive damage when an engine seizes.

There’s another little known but essential piece of the coolant system that preserves the engine. It’s known as the freeze plug. If you recollect from high school chemistry, water expands when it freezes. In freezing weather, the coolant can ice up when the vehicle is left sitting.

Auto Care Is What We Do

It is difficult to accept, but the expanding iced coolant is enough to damage the engine block. The freeze plug fits into the engine block. The caps fit tight enough to withstand the pressure of a running engine but can extend or pop out if the coolant ices. Little things like this can save a lot of engine blocks.
The team at Wayne’s Automotive Center can check your cooling system and make any necessary adjustments or repairs. Give us a call.