Learning About The Serpentine Belt

Have you ever wondered how the serpentine belt got its name? It derived its name from the fact that it snakes around various components under your hood. It may lack its namesake’s fangs, but it sure packs a wallop when it breaks.

If you’ve ever heard a squealing sound coming from under your vehicle’s hood, chances are it was your serpentine belt. The serpentine belt powers a lot of engine systems. On some cars, it runs the water pump, which cools the engine and keeps it within optimal operating temperatures. On some Reno and Sparks vehicles, the timing belt powers the water pump instead of the serpentine belt. The serpentine belt also powers the air conditioning, which cools the passengers; and the power steering pump, which allows for easier steering. More importantly, the belt powers the alternator which creates electricity used by your vehicle’s electrical systems. The battery is meant to start your car, not run it. Without the alternator, the battery will go dead after a short distance. When the belt breaks, all of these systems shut down.

So, maybe you can deal with not having an air conditioning or power steering for a short time, but without an alternator, your battery won’t live very long. Also, when the cooling system goes down, your vehicle engine will overheat. That’s why Reno and Sparks drivers should never wait to get a serpentine belt replaced.

How To Tell When The Serpentine Belt Needs Replacing

Vehicle manufacturers outline recommended replacement guidelines in the owner’s manuals. If you cannot find information on the maintenance of this critical component in your owner’s manual, come to see us at Wayne’s Automotive Center. 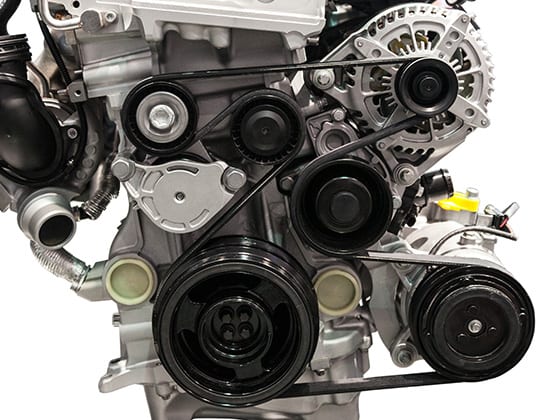 At Wayne’s Automotive Center in Sparks, your professional technician can perform a visual inspection of the belt to see if it has any cracks that signal the belt could fail soon. Replace the belt if it has one or more of the following conditions regardless of age or mileage:

The belt has more than three or four cracks every inch or couple of centimeters
Deep cracks which penetrate half the depth of the belt
The belt is frayed
Pieces of the belt are missing
The belt has a shiny, glazed look
If it has lost a significant amount of thickness, it also needs to be replaced.

Wayne’s Automotive Center Can Help With Your Serpentine Belt

Talk to your service advisor at Wayne’s Automotive Center. Attached to the engine is a special spring-loaded pulley called a tensioner pulley. The pully’s places constant tension on the serpentine belt, so it doesn’t slip. If the spring becomes worn, it will no longer provide the necessary pressure to keep the belt tight. At Wayne’s Automotive Center, we recommend you replace the tensioner at the same time as the serpentine belt.

As mentioned earlier, a squealing sound could be a sign you need to replace the serpentine belt. When a belt is loose, you may hear a slow slapping sound under the hood.

Serpentine belts are relatively inexpensive at Wayne’s Automotive Center in Reno and Sparks. The costs look downright cheap when you compare them to the expense of an overheated vehicle engine, a tow truck, time lost on the road, inconvenience, and the potential safety consequences of being stranded.

All in all, the serpentine belt is essential to the operation of your vehicle. And it’s not that costly to replace – so it’s good to do so before it fails. Proper car care means never putting off preventive maintenance. Do yourself a favor. Ask your friendly and knowledgeable Wayne’s Automotive Center technician to glance under your hood and give that serpentine belt a quick look-over.