To back up a little, vehicle owner’s manuals have schedules for preventive maintenance: things like oil changes, transmission service, and so on. They say you should change your oil every so many miles or after so many months. Reno drivers understand this very well. What they may not know is that there are actually two service schedules: the regular schedule and the severe service schedule. Severe service schedule has lower mileage and time intervals.

Now when you hear ‘severe service,’ you may think it doesn’t apply to you because you don’t feel your driving conditions are severe or extreme – it’s just normal everyday driving in the Reno area. So let’s list some of the conditions that classify as severe so that you can make the judgment on your own driving.

Before we start the list, here’s a point of contrast that definitely is not severe driving. Driving down your nearest Nevada interstate at the highway speed limit on a 75° F / 24° C day loaded only with your passengers. This is an easy trip for your vehicle: your engine is loafing along at low RPMs, no heavy loads to pull and moderate Reno temperatures. Let’s look at some severe service driving condition example. 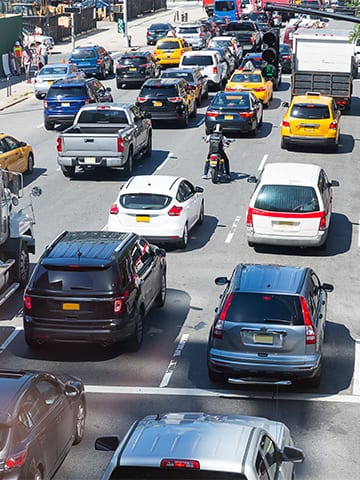 Most trips around Reno are less than four miles/six and a half kilometers. Once your vehicle engine cools down, moisture condenses in the engine. This water in the oil doesn’t get a chance to evaporate on short trips because the oil doesn’t get hot enough. More short trips in your vehicle mean more water build up. And water in the oil leads to the creation of sludge which can damage the engine. More frequent oil changes keep sludge from building up. By contrast, highway driving warms the engine up and gets the water burned off.

Here’s another example: most trips around Reno are less than 10 miles / 16 km and outside temperatures are below freezing. This is the same reasoning, but in very cold Nevada weather it takes even longer for the oil to get hot enough to evaporate the water, hence 10 miles / 16 km as opposed to 4 miles / 6.4 km.

Next, you drive in very hot Nevada weather. The hotter it is outside, the more cooling the engine, transmission, brake fluid and so on demand. Residing in a more hostile environment simply causes the fluids to break down faster. Therefore, the lower change interval.

Another condition: driving at low speed most of the time. Every vehicle engine has an operating range called its power band. This is a range of RPMs in which it’s most efficient. Low-speed driving doesn’t keep the engine in its power band so it’s working harder. This is one of the reasons fuel economy ratings are worse in downtown than on the highway.

Stop and go driving in downtown Reno is another severe service condition. You’re constantly accelerating, which works the vehicle engine and transmission harder. Then you’re stopping with equal frequency, which works the brake fluid harder, causing it to get very hot. On the other hand, highway driving requires far less horsepower to maintain its speed than getting a stationary vehicle from a stop light up to 25 mph / 40 kph. You’ll need to follow the severe service schedule if you experience a lot of this.

Operating your vehicle in dusty, polluted or muddy conditions is also on the list. Your engine air filter and cabin air will obviously get dirty faster and need to be changed more frequently as will your breather element. Even then, some of this dust and dirt will make its way into your fluids. They will simply get dirty faster and won’t protect the components as well as fresh fluids.

Finally, you’re driving under severe conditions in Reno when you tow a trailer, regularly carry heavy loads, or carry a car-top carrier. This is pretty obvious. As you spend more time in lower gears so the engine and transmission work much harder and create more heat. Stopping the heavier loads places more stress on the brakes.

Most of us in Reno seem to operate under severe driving conditions at least some of the time. How can Reno drivers know which schedule to follow?

To decide if you should do your preventive maintenance closer to the severe service recommendation or the regular recommendation you should think about your driving conditions carefully. Of course, your Wayne’s Automotive Center service advisor can help you with your decision.