All modern Reno vehicles come with fuel injection systems, so it’s a topic Reno drivers need to know something about. The mighty fuel injector is a valve that delivers the gas or diesel fuel to the right place, in the right amount at the right time—to be mixed with air and burned in the engine.

Do you know how many fuel injectors your vehicle has? There’s one for each cylinder. So four, six or eight for most folks in Reno, Nevada. Some vehicles have ten or twelve cylinders. The engine control computer adjusts the fuel injector as it monitors the engine and other sensors. Fuel injectors are a pretty high-tech.

Wayne’s Automotive Center can help Reno drivers with a fuel injector cleaning service. What’s the benefit? Fuel injectors have to deliver the fuel at a precise pressure at a very precise time to work properly. It’s important that the fuel is sprayed in a particular pattern as determined by the engine design.

Over time, varnish can start to build up in the fuel injectors, affecting the pressure, pattern, and timing of the fuel charge. The result is that the fuel doesn’t get burned as efficiently as it could. That robs performance and hurts fuel economy. 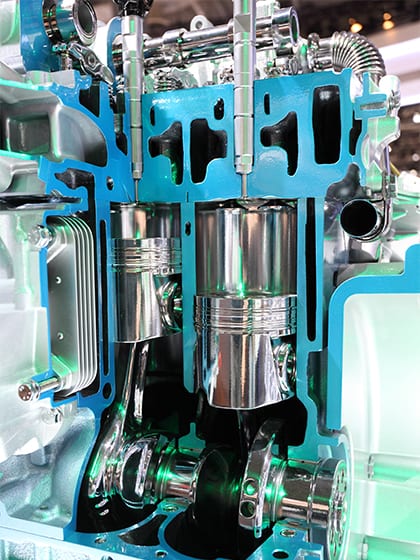 What about dirty fuel? How does that affect the fuel injectors? In the fuel system, the fuel injectors are the last stop. It starts at the fuel tank. Frankly, the best way to keep your fuel injectors working well is to use high-quality fuel. It’s tempting to shop for bargains in Reno with fuel prices as high as they are, but major brands in the Reno, Nevada, area have better detergents and additives and deliver consistent quality.

What about a good fuel filter? The fuel filter is a component of the fuel system. Its job is to filter out the dirt and rust which collect in the fuel tank. If the filter is clogged up, the dirt will bypass the filter and head upstream to the fuel injectors.

It’s important to replace the fuel filter when your manufacturer recommends it. That’s part of a comprehensive fuel system cleaning.

There are different kinds of fuel injection systems. Port fuel injection systems, the kind most gasoline engines have, operate at 60 pounds per square inch. The injectors for the new gas direct injection engines Reno drivers are starting to see require 10 to 30 times as much pressure. And some diesel engines for passenger vehicles have injectors that operate at 30,000 pounds or more per square inch. There’s no room for dirt and gum in a precision part like that.

There are a lot of good products available in Reno, Nevada, that can clean fuel injectors. These products are best used to prevent fouling in the fuel injectors. Many can’t clean a seriously gummed up injector – that requires a professional deep cleaning, like those we offer at Wayne’s Automotive Center in Sparks. But putting the cleaner in the fuel tank after you’ve had Wayne’s Automotive Center take a look at your fuel system will help keep it clean. Be sure to read the label for directions.

Give us a call if you think your vehicle may be ready for a fuel injector cleaning.